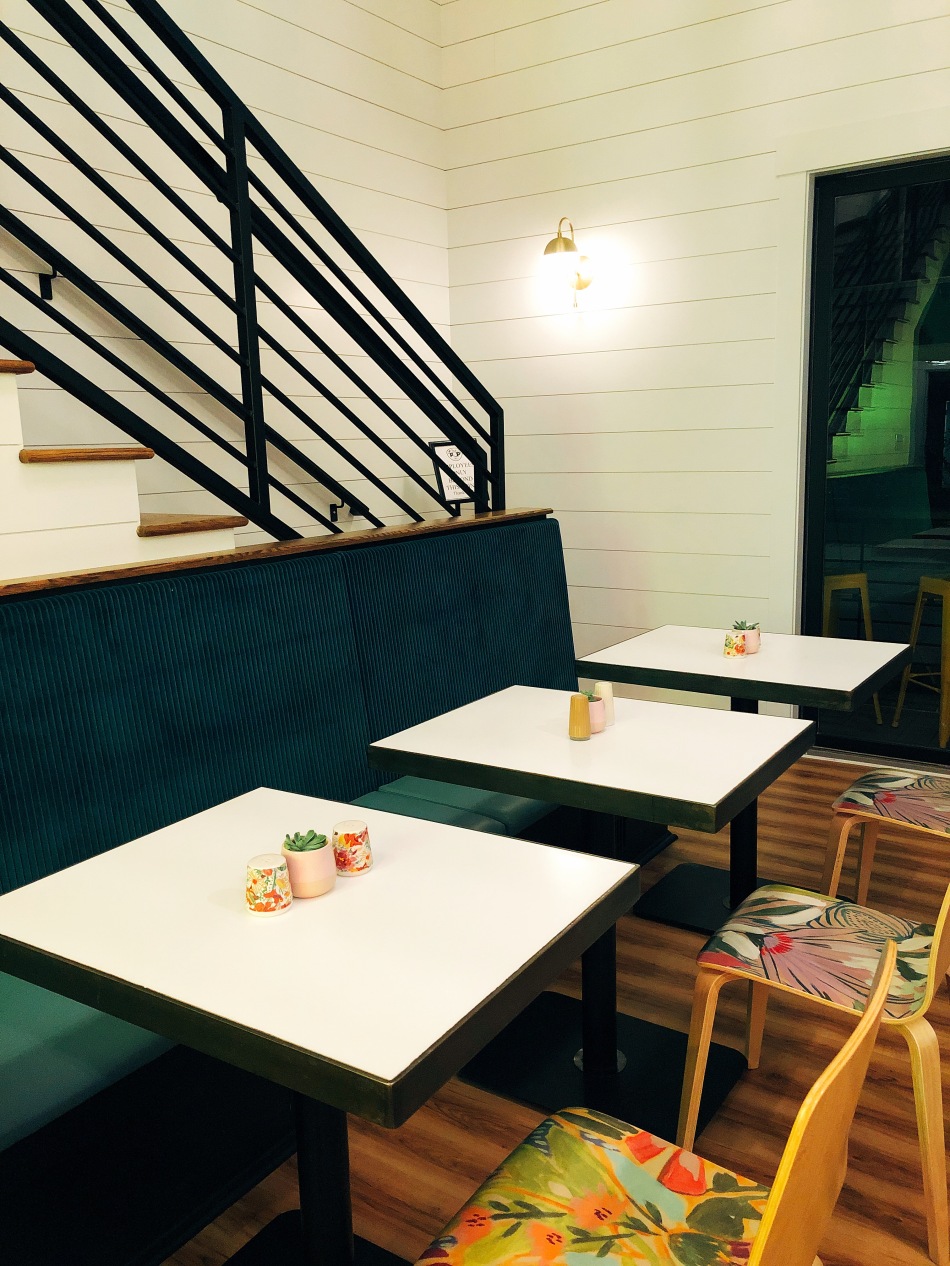 You get a double header of Friday Foodie this week because it’s almost Thanksgiving break and I finally have a free minute to sit down and type up reviews for all the places I’ve been visiting lately. I’m excited to share about Just Pop In! because it is in my neighborhood of Broad Ripple and their new location is a revamp/new concept for a much-loved Indianapolis business. Just Pop In! has been making gourmet popcorn for over a decade. The popcorn is yummy and delicious and I frequently buy colorful tins for friends as housewarming or “thank you” presents.

After years of being successful in their small shop, the owners decided to expand into a cafe! A cafe of food, drinks, and popcorn! A place where you can have popcorn and wine pairings or meet up for brunch. Pretty everyone loves popcorn, so a popcorn cafe sounds like a really awesome idea. I was very excited for the big opening, so my friends and I planned a girls night during the first week of business. 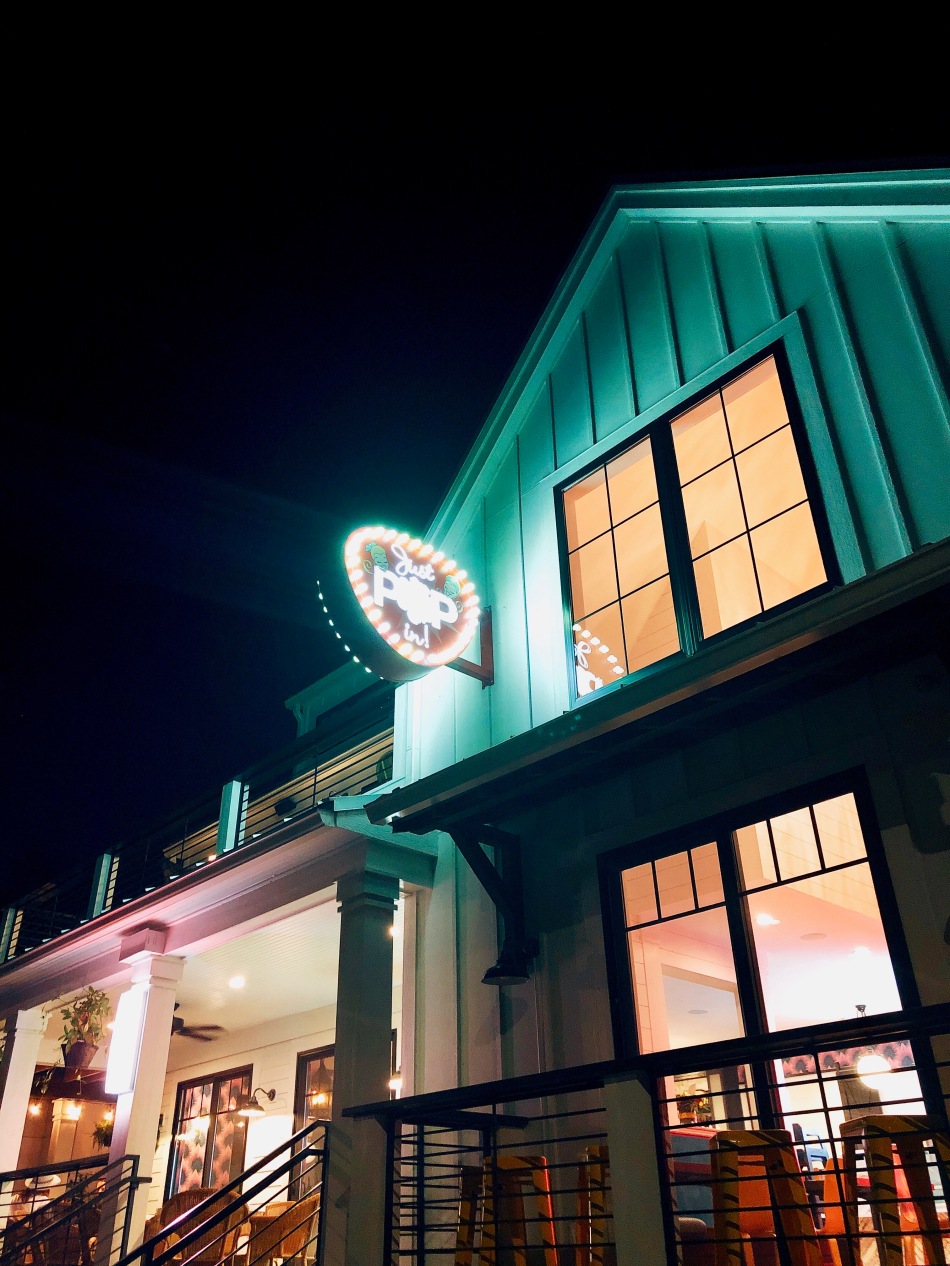 And what did we find? Well, there was no wait, which is a good thing for us, but an odd thing for a much-anticipated restaurant opening. The interior is bright, cheerful, and quirky–kind of like a sisterhood between Kate Spade and Lisa Frank. And then we got to the menus. There was a beer list, a wine list, and a sherry cocktail list. Do people like sherry so much that it needs a whole menu? Who is drinking sherry in Indianapolis?? I need to know. But I also couldn’t pass up ordering a sherry cocktail since the concept seemed to be very important to the company. And then the food menu: bagel sandwiches, meat and cheese plates, hummus, veggies and dip, and some small salads. Basically cold items that don’t require a kitchen. I know I’m being picky, but when a restaurants describes itself as having “small plates,” I guess I expect at least a couple hot options, especially on a fall night. 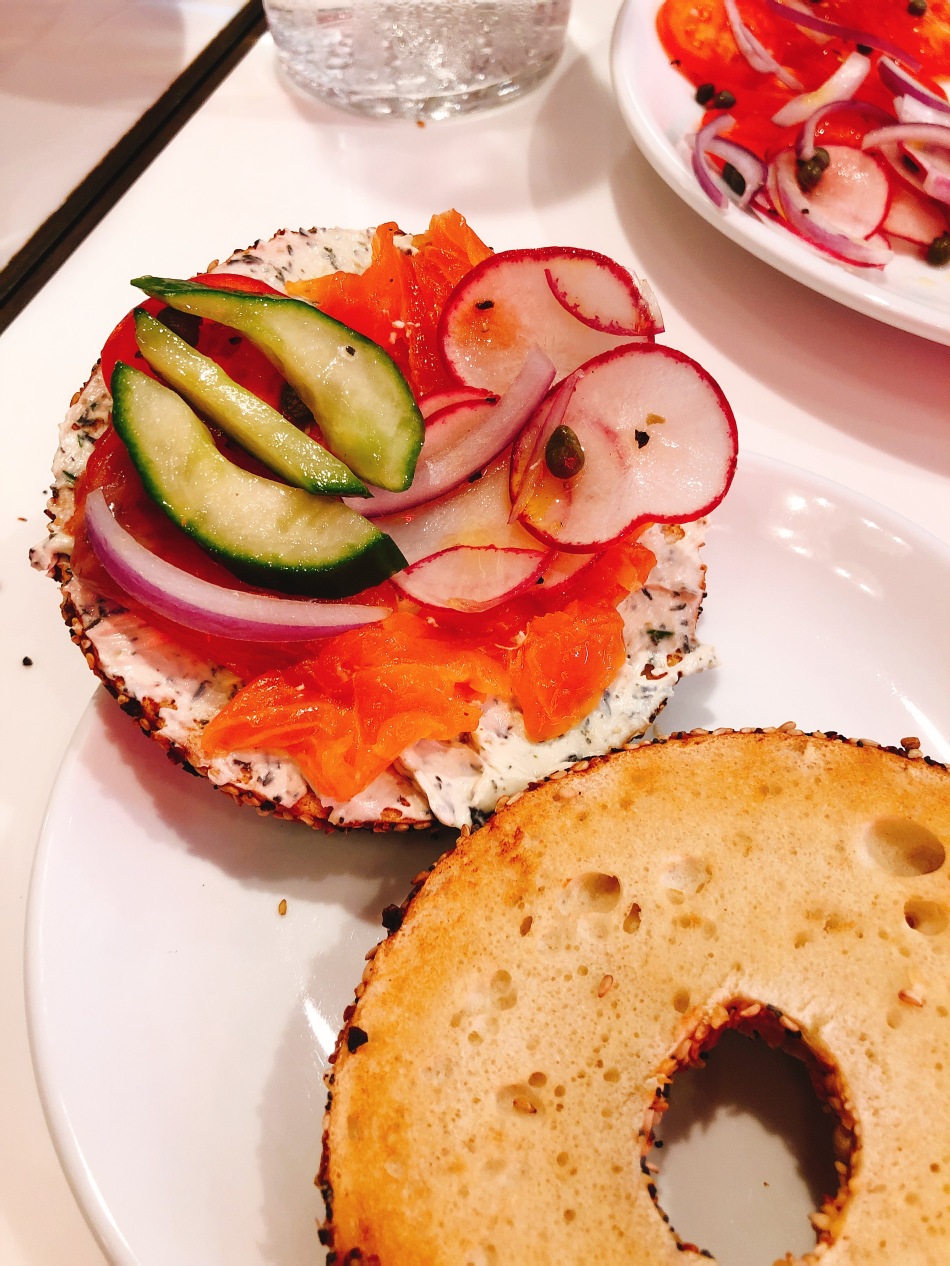 So, I ordered the lox bagel. It was described as a “service” item, which meant that I was served a plate of lox, a plate of veggie toppings, and a bagel and I got to assemble my bagel sandwich by myself. It also came with a (very) tiny bowl of dill popcorn. This is all fun and cute, but it was also $15, which seems a bit steep for a bagel sandwich that I had to assemble. In addition, our server brought out the bagel toppings, but forgot to bring out the bagel, so it was cold by the time it finally arrived. My friends ordered the tuna salad and egg salad bagel and had similar reactions. The food was pretty and was fun to assemble, but it was also pretty expensive for a cold bagel sandwich. 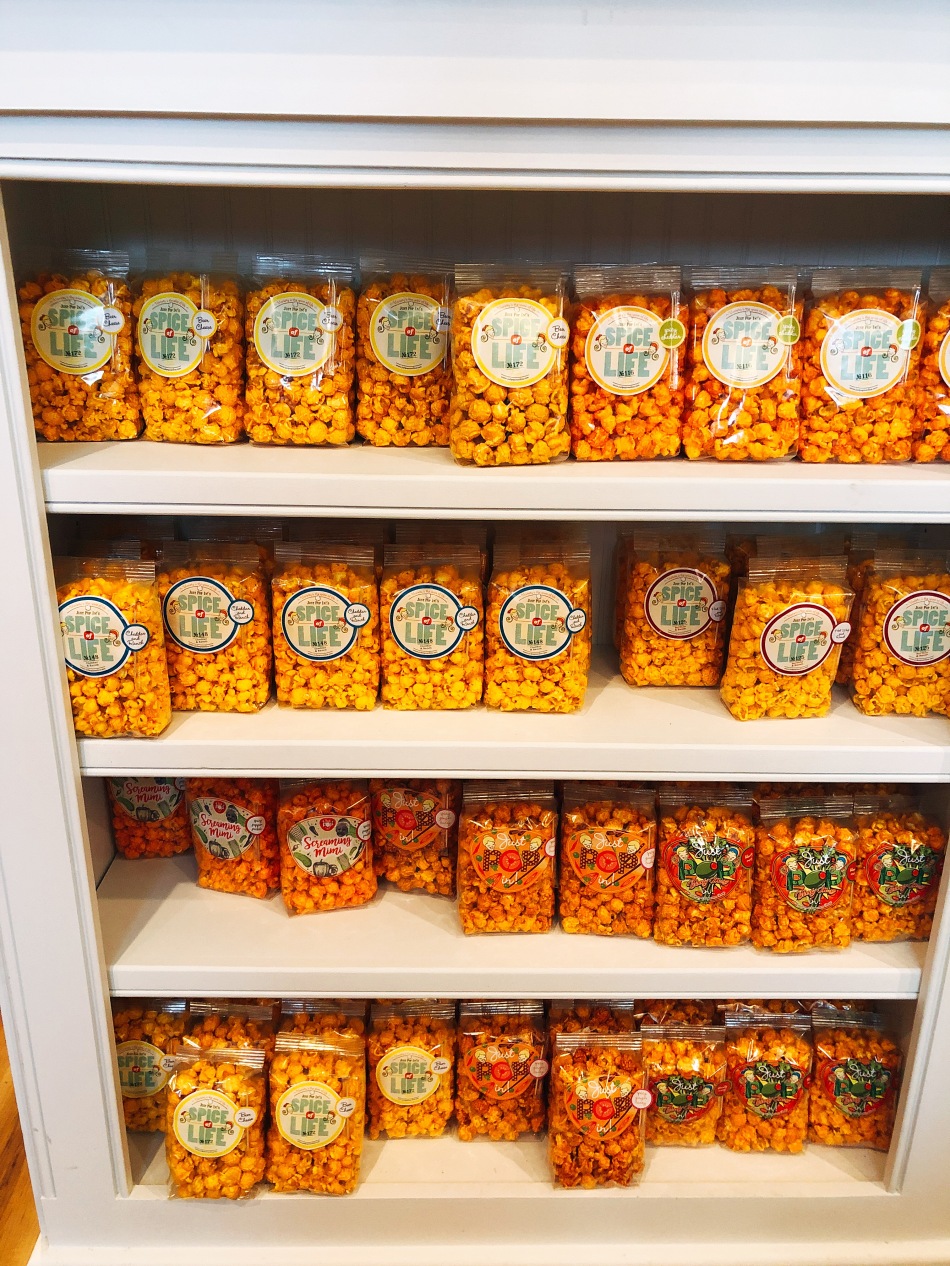 I think I am just missing the vision of the new popcorn cafe. I love the idea of popcorn and cocktails, but I think the menu may need some tweaking. The sherry in my cocktail reminded me of cooking sherry in my Thanksgiving stuffing, which is not exactly the flavor I am hoping for when out for drinks with my friends. I would also like to eat something warm. It’s cold outside, people! I may want to try the wine and popcorn pairing ($16) sometime, but I can eat A LOT of popcorn and I’m worried I’m just going to get another tiny dish. I also hope that the service improves because we were pretty much ignored throughout our bagel and sherry cocktail culinary adventure.

The idea has potential and the owners obviously put a lot of time into their vibe and decor, but I think they need a new menu consultant. I’m pretty busy, but I suppose I’ll be willing to help them out and offer my services (I kid, I kid). What do you think? Would you pay $26 for a lox bagel and a sherry cocktail? I’m pretty sure my idea of a popcorn cafe is just a bottle of bubbles and a huge bowl of caramel corn. 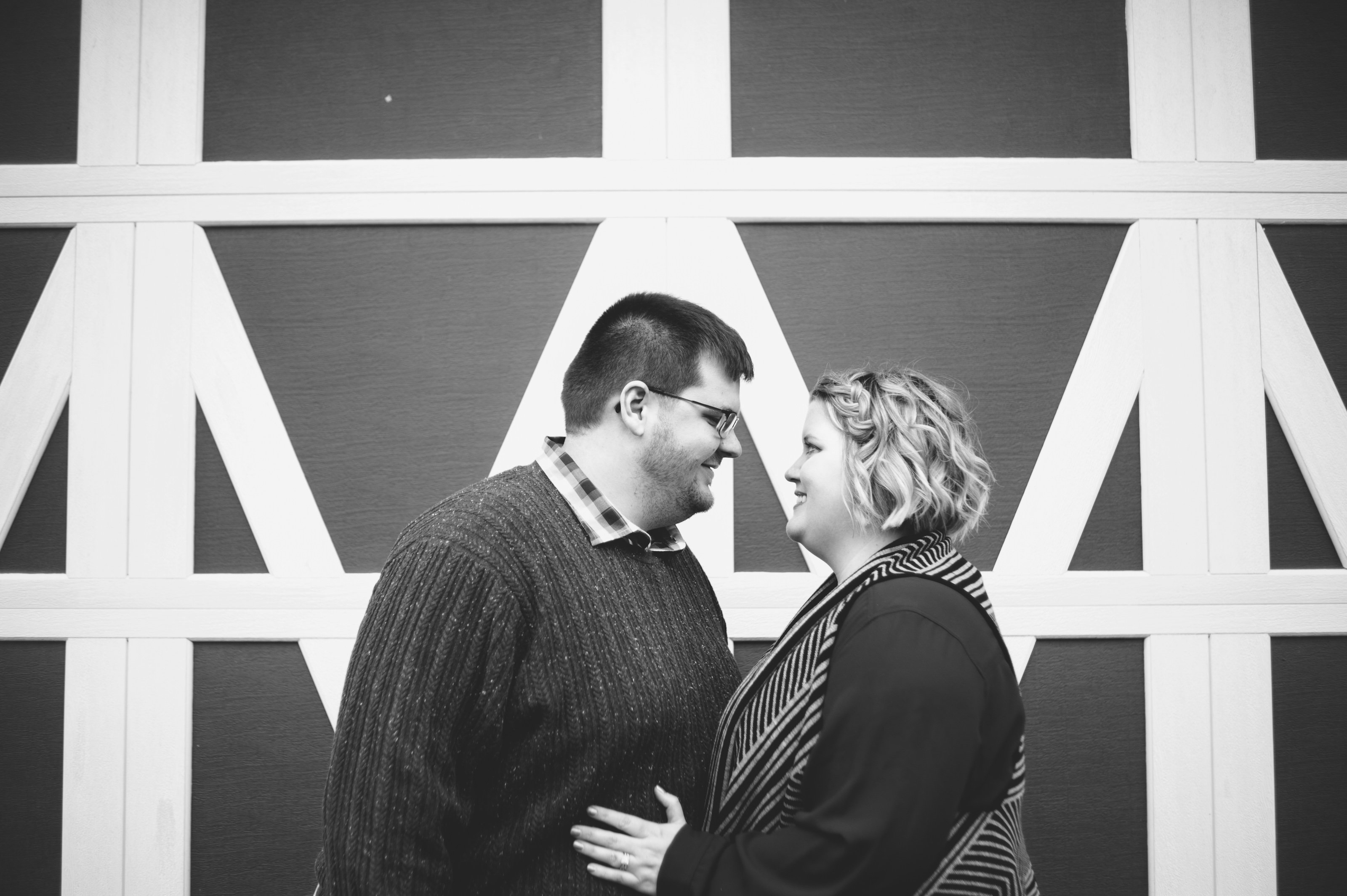